In the trenches together: A Navy wife’s untimely death illuminates the strength of military spouse friendships - We Are The Mighty

In the trenches together: A Navy wife’s untimely death illuminates the strength of military spouse friendships 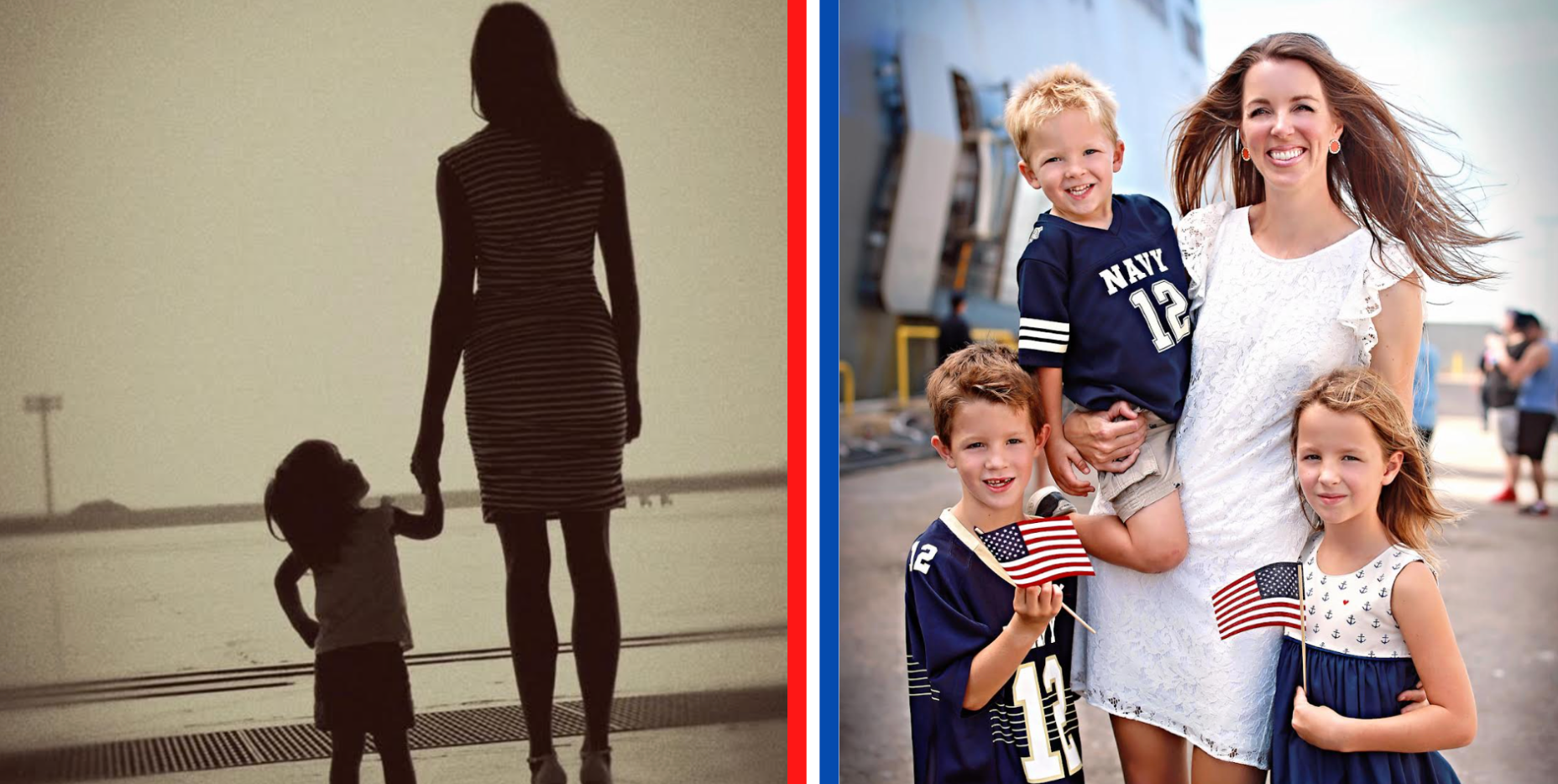 “Nobody expects this,” friend and veteran Navy spouse Julie Donnelly said. “You watch it play out in your mind, people coming to your door telling you your husband’s never coming home. This is a whole different tragedy.”

In November 2021, beloved military spouse Kate McDonald passed away from cancer at just 36 years old. Both Navy brat and Navy wife, Kate left behind a devoted husband, three blossoming children and a vast network of friends from military duty stations around the world.

From the trenches of Navy life, Kate demonstrated quietly, tirelessly, how to endure the hardest seasons as a military spouse during wartime service. Through smiles and tears, a few close friends from her military community shared the lasting impact of Kate’s life.

Born at a naval hospital in San Diego, California, Kate McDonald took her first breaths as the daughter of a Navy physician. Relocating to bases in Cuba, Indiana, North Carolina and Hawaii, Kate grew up learning practical knowledge about military life she would later pass on to friends as hard-earned wisdom.

“Kate was such a wealth of information,” said her friend Caitlyn Chance. “She was realistic. She didn’t sugarcoat anything. As a new Navy spouse, I learned a lot from her.”

First locking eyes at a mutual friend’s wedding, Kate met her future husband Andrew in Annapolis, Maryland, her hometown at the time. In 2008, the two married at the iconic U.S. Naval Academy Chapel and, together, embarked on a rollercoaster journey through Andrew’s career in Naval aviation, which began in Pensacola, Florida.

Within a year of moving to Florida, the couple relocated to Coronado, California, where they discovered a new family member was on the way.

Mallory Moffit, then an acquaintance of Kate’s, first heard the couple’s baby news during a prayer spoken at church. “I remember turning around and smiling at Kate,” Mallory said, “and she was just beaming.”

With their tiny daughter Elizabeth in her arms, Kate joined Andrew on overseas orders to the remote island of Guam, a move Caitlyn Chance also made as a newly married pilot’s spouse.

“We weren’t very likely friends. Kate had a newborn baby, and I had a dog,” Caitlyn said. “But we found a common bond because we lived on the same street and loved walking together.”

Soon after arriving on Guam, Kate learned she was expecting their second child, a son named Sean, due during Andrew’s deployment.

Navy spouse Andrea LaRoche, who was also expecting a second child during deployment, recalls the unique reassurance Kate offered in that situation. “Having a baby without our husbands home was horrible. But I could see that Kate came through it, so I knew I was going to be okay. Kate was always so confident she was going to be okay.”

“We had a weekly playdate where we got mocha fraps and the kids had hash browns,” Andrea said. “We would either go to a playground or to someone’s house. It was a little thing we looked forward to every week.”

New at the time to marriage and motherhood, Julie Donnelly remembers Kate as a source of strength while solo parenting during the long months of deployment.

“Kate wasn’t just my friend when things were nice and pretty,” Julie said. “She was my friend when I was on the couch sobbing because my husband was gone, my family was far away, and I didn’t know what to do with myself.”

Showing up for friends

After their tour on Guam, the McDonalds followed orders to Norfolk, Virginia, where they welcomed their third child, Patrick.

Also new to Norfolk, Mallory Moffit reconnected with Kate during the exhausting years of raising babies during workups and deployments. “Kate would double a dinner recipe and drop off the other half. I can’t tell you how many times she left a Starbucks on my porch,” Mallory said. “She showed me there are lots of ways to show up for people that don’t have to be big gestures.”

Friend and neighbor Mary Yonkman remembers Kate kneeling beside her on the bathroom floor during her worst episodes of morning sickness. “Kate came alongside you and endured the hardest moments with you,” Mary said. “She had great instincts for that.”

Soon after Andrew returned from a long deployment, the McDonald family received orders to a squadron in Atsugi, Japan. The duty station promised an intense operational tempo, plus more deployments.

“That tour was soul-sucking,” recalled Navy nurse turned Navy spouse Amanda Haupt. “But there was so much bonding. For the spouses and families within the deploying squadrons, there was an intense understanding that we were all in the trenches together.”

Amanda remembers Kate would sometimes drop off dinner unexpectedly and would often show up at the park with treats to share. “These little gifts would come up out of nowhere when you least expected it,” she said. “It refilled your cup so that you could, in turn, help somebody else down the road.”

Living on the same block as the McDonalds in Atsugi, Misha Ross remembers Kate for the simple act of showing up. “Small, everyday moments, Kate would just show up,” Misha said. “She always thought about other people before herself. Even in the thick of battling cancer.”

Shortly after her husband returned home from deployment at the end of 2019, Kate sought medical care on base in Japan for a lingering cough she couldn’t shake. The scans returned a shocking diagnosis that shattered her world – renal carcinoma, which had metastasized to her lungs.

Suddenly fighting for her life, Kate was medevaced to Walter Reed Army Medical Center in Maryland, where brain scans revealed additional malignant tumors. Taking only a few suitcases of belongings, Andrew and the kids followed, saying an abrupt goodbye to their home and friends in Japan.

As Kate began the first rounds of immunotherapy and radiation treatments, friends around the world supported her in every way they could to allow her to focus on healing. In Japan, spouses packed up the McDonald’s former home to prepare their household goods for shipment to Maryland. Stateside, friends organized meal trains, sent favorite treats and visited as the pandemic allowed.

To help coordinate care, Misha set up a Facebook group called Kate’s Crew. “I knew Kate had friends all over the world, a lot of whom I didn’t know. It was a way to bring everyone to one place to continually support her.”

Recalling the meal drops, cards, gifts and a visit from California, Mary said, “I felt like for the first time I could show up and give some of the love that Kate had so generously given me.”

In November, an unrelenting cough sent Kate to the hospital. Despite her fighting spirit and the tremendous efforts to prolong her life, Kate passed away a few days after Thanksgiving.

“She was a fighter and tough as nails. Her heart endured an ultramarathon pace for about five days before finally giving out,” Andrew said. “She did everything to her utmost, still trying to be there for her friends, me and her children. We had discussed what may happen, but Kate didn’t let that get her down or change her outlook on life.”

In their grief, friends from every duty station banded together to support the McDonald family. In December, they traveled from all over, some crossing oceans, to convene in Annapolis for the memorial service. Despite childcare obstacles, conflicting holiday plans and the rising pandemic threat, a fleet of Navy spouses and uniformed servicemembers showed up that day to celebrate Kate’s life. Thousands more viewed the service online.

“It didn’t surprise me in any way that so many people came,” said Misha, who traveled from Hawaii. “I imagine if everyone had shown up who wanted to, there wouldn’t have been enough room.”

‘What gets you through’

In the weeks following the service, a few of Kate’s friends (all current or veteran members of the Navy’s aviation community) shared about the nuances of military life that led to such unusually strong friendships.

“We got married and moved to a tiny island to support a new husband’s career, which is not in tune with our culture,” Caitlyn said. “It’s impossible to keep a steady job. You’re forced to make friends and survive. I think the best friendships are forged in difficult circumstances.”

“So many people will say to a military spouse, ‘I don’t know how you do this,’” Mallory said. “That’s not something spouses have to say to each other. We can vent or support each other with an understanding that doesn’t have to be spoken.”

“It sounds so dramatic, but we actually need each other,” Mary said. “This life is actually painful. Being separated from your husband. Raising kids on your own for a stretch of time. The worry. It is body-mind-and-soul so hard to carry. And it is so often misunderstood by the outside world.”

“Most families probably aren’t worried about their spouse dying or getting hurt at work. You almost don’t want to voice these fears out loud because you don’t want to give them power,” Misha said. “But those worries are real. With military friendships, you don’t have to voice those concerns. Everyone understands.”

“You share the scariest moments of your life with these people,” Julie said. “What gets you through that is each other.”

Among family, friends and her military community, Kate McDonald left a legacy of heartfelt devotion, kindness and genuine connection that continues to be a source of inspiration.

Reflecting on Kate’s burial service at the Naval Academy Cemetery, Mary said, “Kate suffered. Yes, be sad. Mourn, grieve, cry. Take moments to rest and heal. But Kate lived so fully—even through cancer. She knew deeply what a gift it was to be alive.”

“I try to channel my inner Kate,” Misha said. “Kate would be patient and compassionate with her kids. When I’m doubting myself, I remember that Kate believed in me. Even in her dying months, she was believing in me.”

“I was inspired by Kate before her death,” Mallory said. “But since she’s passed away, I have felt more of a drive to be better. To be a better friend and a better spouse and a better mom.”

“Even when Kate was battling cancer, despite everything she was going through, she always wanted to know what was going on in my life,” Andrea said. “That’s the kind of friend Kate was. It was important to her to encourage her friends even to the end.”

Peyton H. Roberts is a writer, speaker and novelist whose work has appeared in The New York Times, Military Families Magazine and more. Her friendship with Kate in Guam and Virginia is a cherished gift of her experience as a Navy spouse.

Editor’s note: It only felt fitting we publish this piece on Military Spouse Appreciation Day, heading into Mother’s Day weekend. Kate was a wonderful mother, a true friend and beloved by all who met her (myself included – we walked countless miles on Guam and drank as many cups of coffee in Virginia). She is sorely missed.