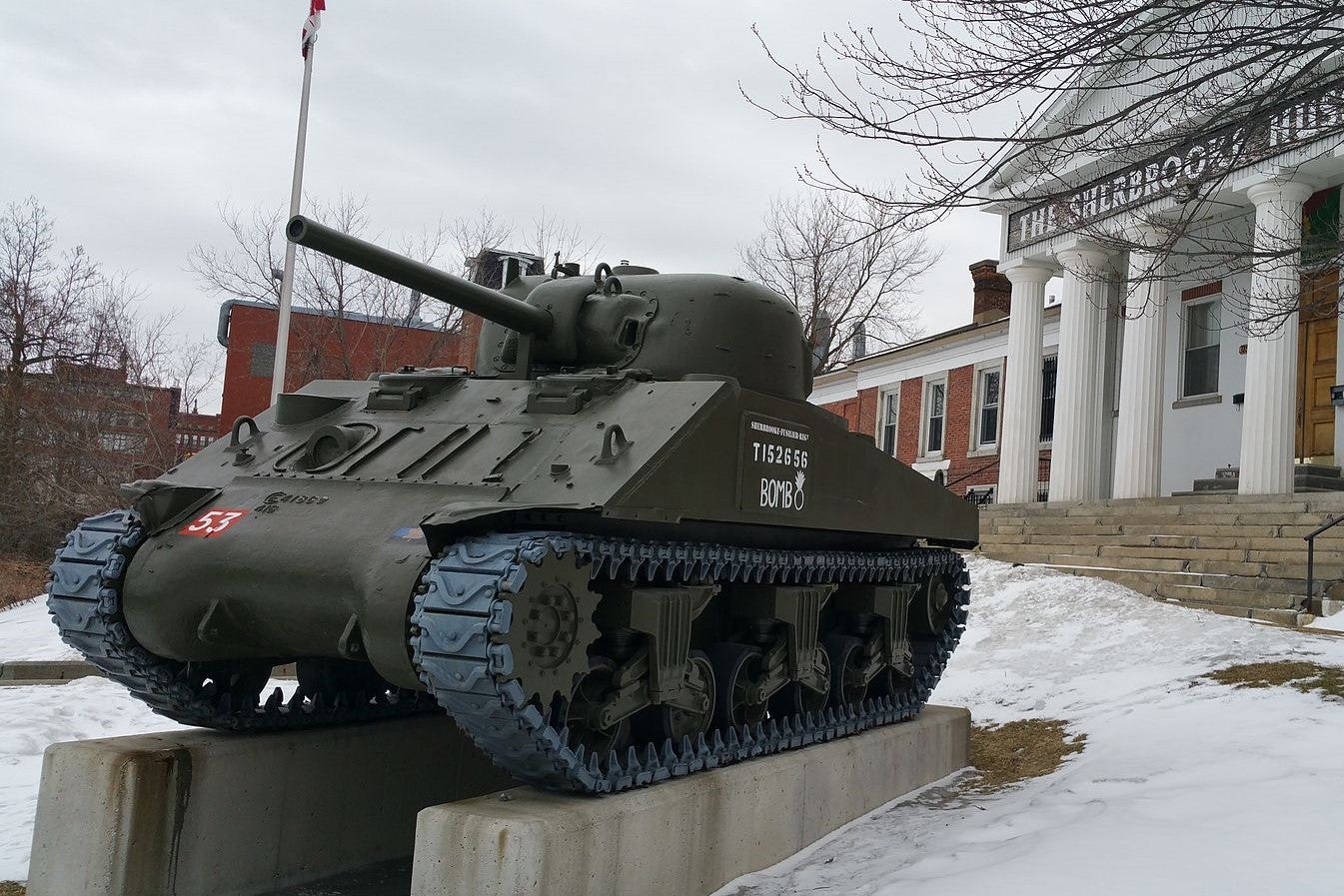 Picture of Bomb, a Canadian Army Sherman Tank. It is preserved in Sherbrooke, QC. (Jaylimo84, Wikipedia).

Reliability is a big selling point in marketing a vehicle. People need to depend on their car to get them from Point A to Point B, every day. When Point A is Occupied France in 1944 and Point B is Hitler’s Berlin, though, reliability becomes the most important selling point.

One Canadian tank was able to do just that. It never missed a single day of service, despite taking two hits, firing more than 6,000 rounds and driving through France, Belgium, and the Netherlands. When you absolutely, positively, need to get there in one piece, “Bomb” is old reliable.

“Bomb” was the name of an Canadian-built Sherman tank in service to Canada’s 27th Armoured Regiment, also known as the Sherbrooke Fusiliers. It landed on Normandy Beach on D-Day, June 6, 1944, and the Fusiliers drove it all the way to Victory in Europe.

Landing at the Canadian objective of Normandy, Juno Beach, Bomb’s combat service started right away. The beach was defended by two battalions of enemy infantry and one Panzer battalion held in reserve at nearby Caen. The Sherbrooke Fusiliers were slated to land on the beach four to six hours after the initial landings.

By noon on D-Day, the Canadians had a headquarters set up and two hours later, Bomb and the fusiliers were on the beach. Once the waterproofing was taken off the tanks, they were ready to advance. But resistance on Juno was harsh in the coming days, when the fusiliers advanced on June 7, they were met by fierce resistance from dug-in defenders.

Bomb and the Sherbrooke Fusiliers destroyed 41 enemy tanks in the first two days of fighting, and by June 13th, the Allies had captured enough ground to form a continuous front in France. In July, despite losing two of their crew to mortar fragmentation, Bomb became the troop command tank.

From there, Bomb led the tanks to liberate the city of Falaise in Northern France and drove on to Belgium and occupied Holland, driving some 2,500 miles on the road to winning World War II in Europe.

By 1945, the combined British and Canadian armies launched Operation Blockbuster, which would put them in the Hochwald Forest in the Lower Rhine region of Germany. After days of concentrated bombing of enemy targets, the Sherbrooke Fusiliers led a three-column attack on the Germans defending the forested ridge in the early morning hours of February 26th. By noon that day, the Allies were in the Rhine region.

After taking the forest, the Canadians were stopped by the Rhine River, but that was only temporary. The Sherbrooke Fusiliers sealed up all the gaps in their tanks, including Bomb, and attached air hoses to them. Once watertight, the now-amphibious Sherman tanks silently floated their way across the river.

The German defenders were no doubt surprised to see a column of Canadian armor bearing down on them as they continued their retreat away from the river.

Bomb’s next stop was clearing Germans from the areas around Zuider Zee, but not long after its arrival, Bomb and its crew received some welcome news: the war in Europe was over. From D-Day to V-E Day, Bomb has driven across the battlefields of Europe uninterrupted, one of only a few tanks to make that kind of journey.

As the men and material were sent home, Bomb ended up in a Belgian scrapyard, waiting to be melted down along with tons of other tanks. It was rescued from that fate, and sent to Canada as a monument to the fighting spirit of Canada’s finest.