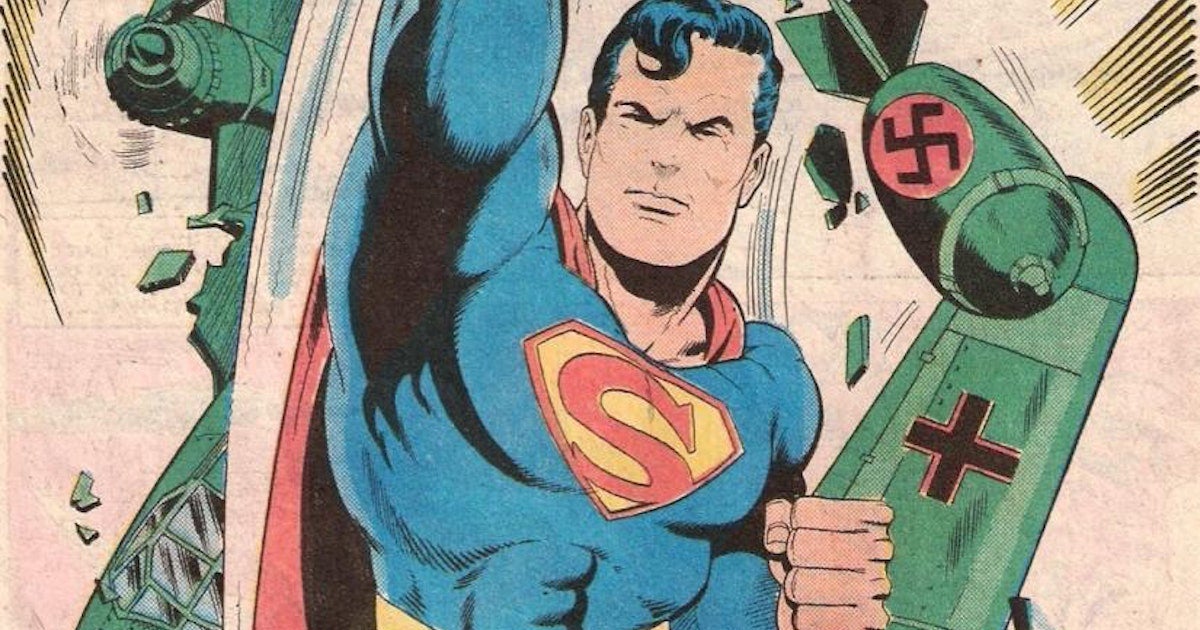 “Superman” famously debuted in Action Comics #1 in June 1938 and immediately made a splash, both here in America but also over in Nazi-dominated Germany. He was the realization of a vision and a dream of co-creators Jerry Siegel and Joe Shuster. Siegel had always wanted to be a writer, Shuster always wanted to be an illustrator. The two had a lot in common. They both loved fiction, they were both creatives, and they were both sons of Jewish immigrants. The year after the two met, Adolf Hitler came to power in Germany. By 1938, the year Superman was introduced, the Nazis had solidified their power by demonizing Germany’s Jewish population – and was quickly rearming.

That same year, the Germans had annexed the Sudetenland area of Czechoslovakia and marched into Austria, all without firing a shot. In 1939, it looked as if war in Europe was certain, as Hitler began preparing for an invasion of Poland while England and France pledged to come to Poland’s aid.

To make matters worse, Germany signed a nonaggression pact with the Soviet Union and its communist dictator, Joseph Stalin. On September 1, 1939, Hitler invaded Poland and the real provisions of the pact were revealed: the Nazis and the Communists agreed to divide Poland and its neighbors. World War II in Europe soon began.

Back in the United States, there was much vocal support for the countries Allied against the Nazis. Readers of Superman and other fiction fans began to wonder why Superman hadn’t intervened in the war in his comics. In February 1940, Siegel and Shuster showed them how that would look.

Superman first attacked the Siegfried Line, a nearly 400-mile long series of fortifications on the German border with France and the Low Countries. He twisted the barrels of its cannons and guns, then blew the concrete roof off of them. When the Luftwaffe attacked him in mid-air, he punched the plane in its nose.

His next stop was the German city of Berchtesgaden, where Hitler’s mountain retreat, the Eagle’s Nest, was situated. Superman beat up Hitler’s Nazi bodyguards, grabbed the dictator by his collar and flew away from the mountain. The Man of Steel’s next stop, with Hitler in hand, was Moscow.

There, Superman swooped up Stalin as he oversaw a Soviet military parade. The Red Army bolted and ran in the face of the American superhero, not even trying to rescue their leader. He took them both to Geneva, to face a trial at the League of Nations for the crime of “aggression against defenseless countries.”

In the U.S., the cartoon was met with good feelings. The feelings in Berlin, however, were not so good. In fact, the feelings were so bad, the chief Nazi propaganda minister Joseph Goebbels had to publish a response to the comic. His first instinct was, of course, to attack Siegel’s Jewish ancestry.

“Jerry Siegel, an intellectually and physically circumcised chap who has his headquarters in New York, is the inventor of a colorful figure with an impressive appearance, a powerful body, and a red swimsuit who enjoys the ability to fly through the ether.” he wrote. But the Nazi propaganda machine didn’t stop there.

“The inventive Israelite named this pleasant guy with an overdeveloped body and underdeveloped mind ‘Superman.’ He advertised widely Superman’s sense of justice, well-suited for imitation by the American youth. As you can see, there is nothing the Sadducees won’t do for money!”