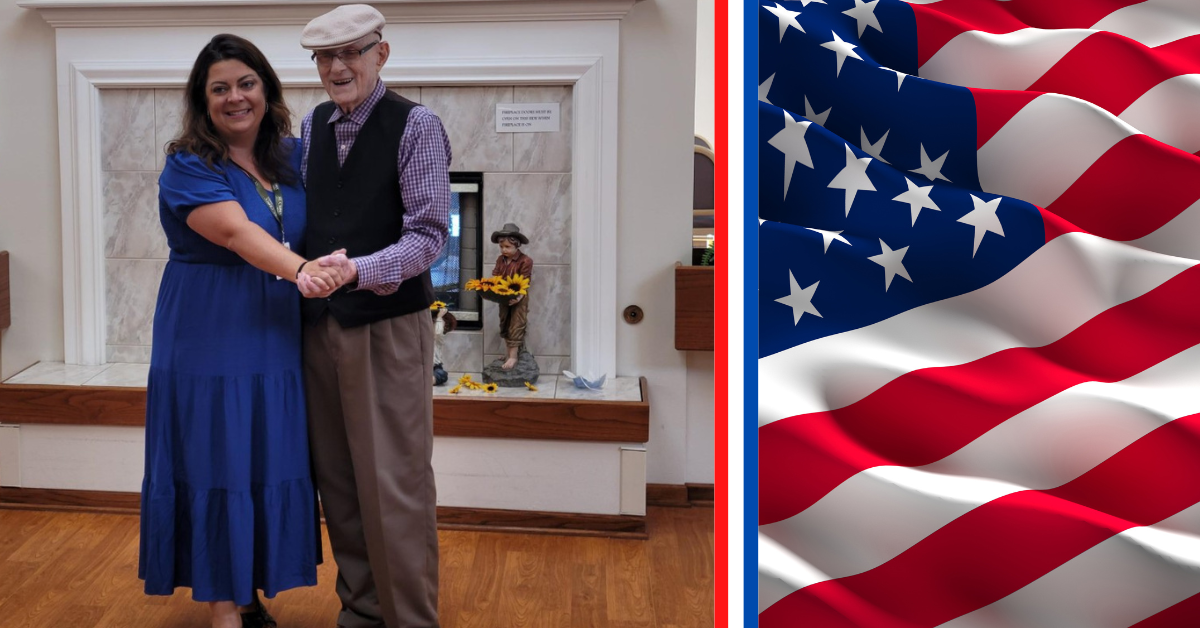 Army veteran Edward J. Lawler thought his ballroom dancing days were long behind him until his hospice staff surprised him with a day of dance. There wasn’t a dry eye in the room.

Thinking about our nation’s heroes entering into care for their end of life isn’t easy. But knowing many are surrounded by dedicated staff and volunteers like those of St. Croix Hospice makes it easier to process.

Lawler was drafted in the Army just after World War II in the early 1950. After basic training he found himself in an old Coast Guard base in Port Townsend, Washington. “One day, I went to the service club on a Friday night and all the girls that they brought in from town were standing around the corner by themselves. And all the soldiers were in another corner,” he laughed. “I thought what the heck’s going on here? I asked the service club director why they weren’t dancing and she said, they don’t know how. So, I grabbed a couple of the guys and I said you guys got to dance with these girls or they really won’t come again. I showed them a couple steps down the sidelines just to get them going.”

After the dancing was over, the director of the service club pulled him aside to find out who he was and what he was doing there. When he explained he was just a plain old recruit waiting for advanced training she said the words that changed everything: I’m going to fix that.

His ballroom dancing career kicked off in that dimly lit military club, though he didn’t know it at the time.

“I was in the barracks one night when the Sergeant came in screaming my name and telling me to put my class A’s on and go to the service club. I ended up getting assigned as the dance instructor and finished my entire enlistment doing it there,” Lawler shared. “I don’t know how it happened, either. I wasn’t a professionally trained dancer but had been dancing since I could walk.”

He’d also loved to cook, learning much from his Italian mother. Lawler laughingly shared a story of using his own money to bake jelly rolls for the soldiers. One of the officers bit into it and told him if he kept cooking like that he’d be stationed there forever.

After getting out of the Army when his two-year enlistment was up Lawer became what he termed “an insurance man” for the next 30 years of his life. “I retired from western and southern life insurance company out of Cincinnati,” he explained.

He reminisced about how he and his wife would go ballroom dancing each Friday and Saturday nights during their marriage. “ I love the latin dances and I like the Rumba and cha cha the most. My wife and I really could do the foxtrot. We would be all over the dance hall. Dodging everybody at the Drake Hotel,” Lawler smiled.

He was recently admitted to St. Croix Hospice. The team wanted to surprise him with a veteran’s recognition ceremony when they found out about his love of ballroom dancing. One of the staff members, Jessica Manthe, had been teaching ballroom dancing for 22 years. Operation “surprise Ed” was on.

When staff posted the surprise on social media, it was shared far and wide. The tears and smiles in the room were contagious. Lawler said he loved getting the chance to put his moves back in practice but said next time (and he hopes there’s a next time), he wants a bigger warning so he can practice.

Even as Lawler faces the unimaginable, he summed up his time on earth simply: It was a beautiful, beautiful life.