‘The Swoose’ is the oldest intact B-17 Flying Fortress 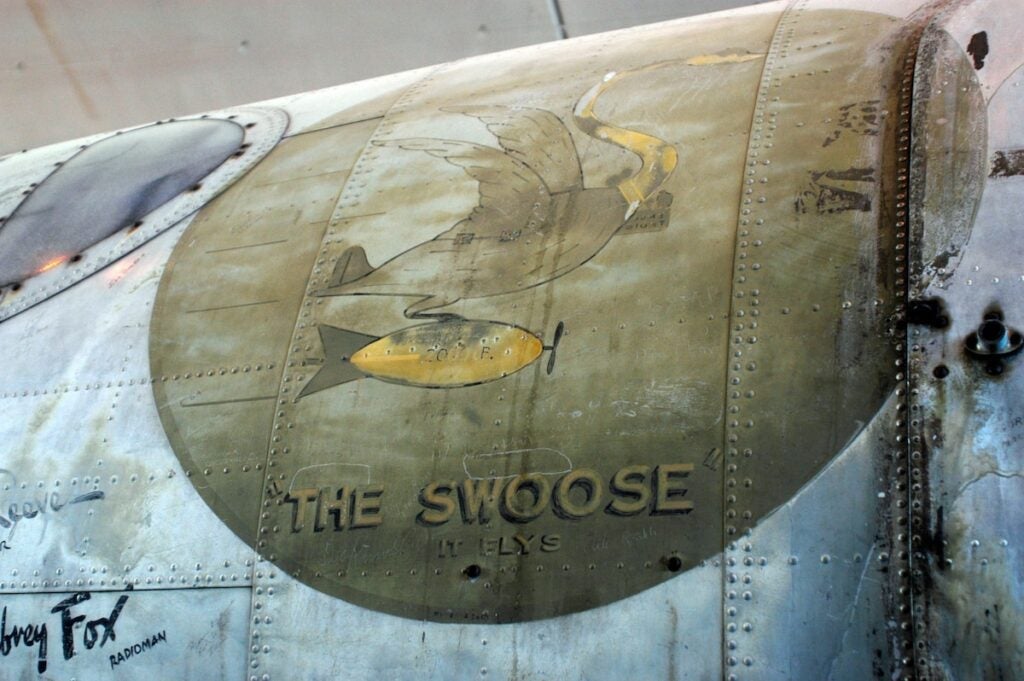 The Boeing B-17 Flying Fortress is an icon of WWII. The aircraft served the U.S. Army Air Force from the beginning to the end of the war and is the third most-produced bomber of all time. However, extensive post-war scrapping left just six known B-17s today that saw combat. While the famous Memphis Belle is one of them, another B-17 holds the title as the oldest surviving example of the aircraft, having been on active service on the first day of America’s entry into the war.

Originally named Ole Betsy, 40-3097 was sent to the southern Philippines in December 1941 as a dispersal measure. This spared the bomber when, on December 8 and just eight hours after the attack on Pearl Harbor, Japanese forces attacked the Philippines. American forces on the main island of Luzon were hit hard and only 19 of the 35 B-17s in the Philippines remained combat capable after the initial attack.

Ole Betsy and the remaining 16 B-17s immediately began flying bombing missions against the Japanese invaders for the next three weeks. The bomber continued to fly combat missions after transferring to Java. With few spare parts on hand, ground crews used salvaged parts from destroyed bombers to keep the remaining B-17s in the air. Ole Betsy flew its last combat mission, a raid on the east coast of Borneo, on January 11, 1942 where it suffered extensive damage from three Japanese fighters but took down two of them.

Following the Borneo mission, Ole Betsy underwent repairs at Royal Australian Air Force Base Laverton near Melbourne, Australia. There, the tail of another B-17D was grafted onto the bomber. Ole Betsy also received more powerful engines and was converted into an armed transport. This led Capt. Weldon Smith, the B-17’s new pilot, to rename it The Swoose after a then-popular song about a half-swan, half-goose.

Following its conversion, The Swoose became the transport aircraft for the Commander of Allied Air Forces in the Southwest Pacific, Lt. Gen. George Brett. In the spring of 1942, Capt. Frank Kurtz became the aircraft’s pilot. Kurtz went on to name his daughter, future actress Swoosie Kurtz, after the B-17. The Swoose flew Lt. Gen. Brett to forward air bases in combat zones. On some of these flights, the crew had to man the B-17’s defensive guns to fight off enemy attacks. The Swoose also set two point-to-point speed records and carried other VIPs including future President of the United States Lt. Cdr. Lyndon B. Johnson.

In December 1945, Lt. Gen. Brett flew The Swoose on its final mission to Kirtland Field, New Mexico for scrapping. The B-17 ended up in Kingman, Arizona where it was slated to be melted down for its aluminum. However, in March 1946, now-Colonel Frank Kurtz convinced the city of Los Angeles to save the historic aircraft and make it into a war memorial. Kurtz flew The Swoose to Los Angeles Municipal Airport on April 6, 1946. When the city could not find a suitable place to display the aircraft, it was donated to the Smithsonian Institute’s National Air Museum in January 1949.

The Swoose was refurbished to an airworthy state at March Air Force Base, California, and flown by Kurtz to a National Air Museum storage facility in Park Ridge, Illinois. The historic aircraft spent the next two decades in storage in Illinois, Texas, and Maryland where it suffered weather exposure and stripping by vandals. Criticism of the treatment of historic artifacts like The Swoose led the Smithsonian to move the aircraft indoors in a disassembled state in the mid-1970s.

On July 15, 2008, The Swoose was transferred to the National Museum of the United States Air Force. It was sent to their facility at Wright-Patterson Air Force Base, Ohio to be restored alongside the Memphis Belle. However, while Memphis Belle has been fully restored and is on display at the museum, restoration work on The Swoose was temporarily suspended in 2019 to allow the Restoration Division to focus on higher priority projects. The Swoose is the oldest surviving, intact B-17, the only surviving example to have seen combat during the Philippines Campaign, the only surviving shark-fin tail D-model, and perhaps the only surviving U.S. aircraft to serve the entirety of WWII.