This amphibious WWII tank could be launched from a submarine underwater 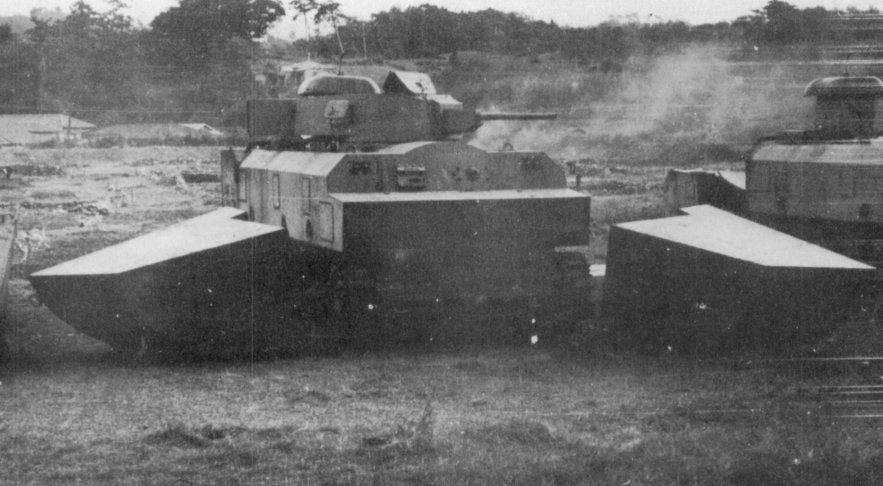 The Imperial Japanese military’s structure during WWII can be considered unorthodox by modern standards. For example, its navy (IJN) crewed and fielded amphibious tanks. Their goal was to support amphibious landings with organic armor and facilitate Japan’s continued island hopping expansion across the Pacific. Following years of research and prototypes that were started by the army, the first production amphibious tank rolled off the assembly line in 1942.

The IJN Type 2 Ka-Mi was a light amphibious tank based on the army’s Type 95 Ha-Go. Although it entered service after America began its own island-hopping campaign, and thus had limited application, the IJN was pleased with the Type 2 and continued amphibious tank development.

Seeking aN amphibious tank with better armor and armament, the IJN started with the army’s newest medium tank, the Type 1 Chi-He. From this, a prototype was developed and completed in 1943. Later that same year, the Type 3 Ka-Chi entered full production and service.

The Type 3’s sides were flat and box-like for streamlining in the water. It was welded together and sealed with rubber gaskets. Most importantly, it could be fitted with two additional pontoons. These were sheet metal and attached at the bow and stern of the tank. The bow pontoon curved up for improved hydrodynamics and split down the middle for mounting and dismounting. The stern pontoon hosted two rudders to assist with steering.

When the Type 3 reached land, its pontoons could be released by the crew from inside. The extra metal of the pontoons, although very thin, served as a bit of spaced armor and most crews kept their pontoons attached. Propulsion in the water was achieved with twin-screws with primary steering provided by two more. A large snorkel behind the turret delivered air to the Type 3’s Mitsubishi V-12 diesel engine and kept water out of the engine compartment An extra cupola was built on top of the turret to keep water out of the fighting compartment as well.

The Type 3 was armed with Japan’s standard anti-tank gun, the Type 1 47mm. Although it was only capable of perforating the frontal armor of an M4 Sherman, the 47mm gun could penetrate its sides and do serious damage to light tanks like the M3/M5 Stuart from any angle. The Type 3 was also equipped with two Type 97 7.7mm machine guns: one mounted coaxially in the turret and other mounted in the bow. The Type 3 had a crew of seven including a dedicated on-board mechanic.

The biggest improvement of the Type 3 over the Type 2 was its ability to launch from a submarine. This could be done even when the submarine was submerged. To achieve this, the Type 3’s rear hull was made of a single convex plate that was riveted to the tank. IJN doctrine stated that the Type 3 was to be covertly deployed off the coast, ideally at night, to reinforce island defenses or deliver supplies. The submarines could then engage enemy ships or slip away in the darkness.

By 1945, however, only 19 Type 3s were built. With America advancing rapidly across the Pacific, the IJN prioritized the development and construction of ships and planes. As a result, the amphibious tank became a low priority. Still, two more amphibious tanks were developed: the torpedo-launching Type 4 Ka-Tsu and the much larger Type 5 To-Ku.

The 19 Type 3s that made it into production were reportedly assigned to the Special Cruiser Squadron of Yokosuka and did not see combat. After the war, British military investigators studied the tanks. It is likely that all 19 were scrapped, as no surviving examples have surfaced since then.