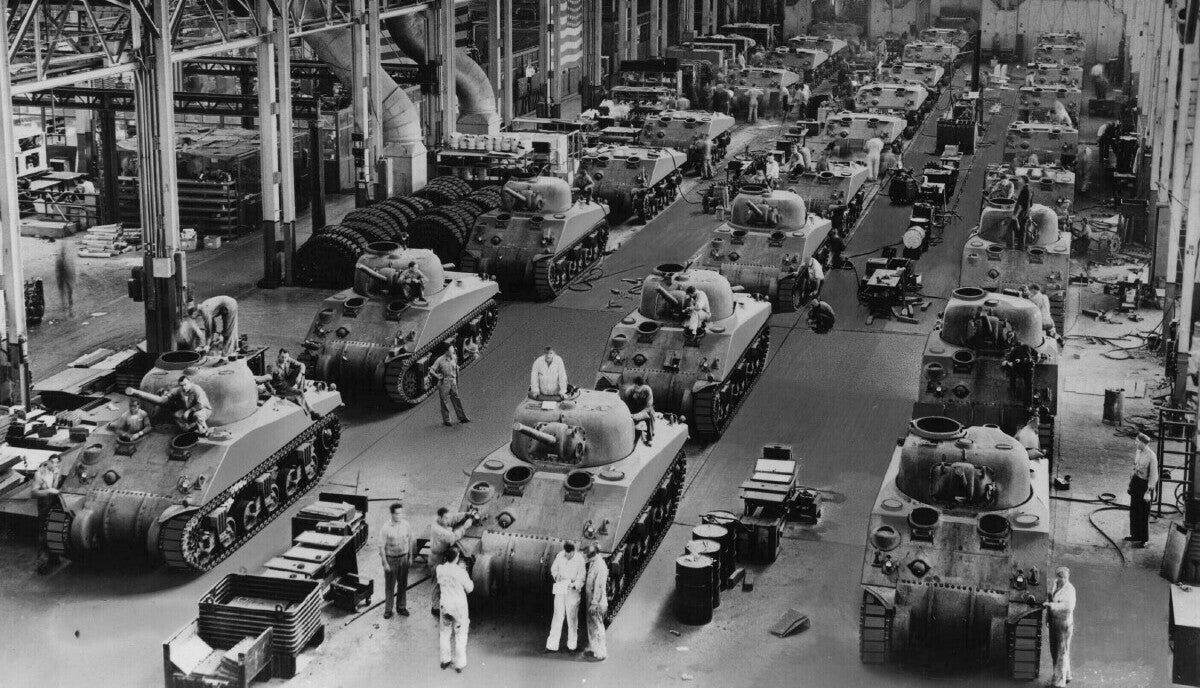 On Aug. 15, 1940, the Army contracted with Chrysler to create the Nation’s first government-owned, contractor-operated facility at the Detroit Arsenal Tank Plant in Warren, MI. This plant became known as the Arsenal of Democracy and has been pivotal in Army engineering ever since. Scene depicts production of M4A4 Sherman Tanks some time during 1942. (U.S. Army photo).

In old World War II photos and many World War II movies, the iconic American tank of the war, the M4 Sherman, can be seen carrying logs on the sides of its armor. The sight makes many wonder why a Sherman tank is hauling around the bulk of a tree while it’s already carrying so much.

The answer is that it was just good practice. A good answer is that GIs of any generation turn out to be pretty good engineers and problem solvers, no matter how much education they’ve had.

While the M4 might have been an effective battle tank that was easy to produce, ship, and fight in combat, it had some failings. One of the biggest failings (especially if you were on Sherman tank crew) was that the enemy had the answer to beating the Sherman tank’s armor.

Shermans were designed for mobility, which meant that it was fast-moving compared to other tanks, but to get that speed and maneuverability meant it had to sacrifice on of the other key components that made a tank deadly: armor or firepower.

Since the Germans were building monster tanks with advanced armor (for the time period, at least) American military thinkers decided sacrificing firepower wasn’t the way to go. That only left them with armor.

At the beginning of the war, American military thought believed the tank would support the infantry in combat and didn’t foresee the large tank-on-tank battles that would rage across North Africa and the Eastern Front. When those things did happen, tank crews realized their armor needed all the help it could get.

German shape charges and copper-cone anti-tank weapons could burn right through the skin of the M4 Sherman tank. Somewhere along the way, some genius figured out that the copper cone weapons the Nazis were using were less effective on wood than they were on metal. It didn’t provide complete protection, but some defense was always better than none.

Being a bunch of naturally resourceful GIs looking to save their own butts, they began to use whatever they could to slow down the velocity of enemy weapons. Sandbags were a natural go-to and many tanks utilized them with their jerry-rigged up-armor. Another method, less plentiful in North Africa, was the logs of fallen trees.

After a good tank or artillery battle in Europe, felled trees were plentiful. Logs also had an advantage over sandbags, a secondary benefit. They could be used to help dislodge the vehicle if it ever found itself stuck in mud, a common battlefield problem.

There was no way a couple of logs were going to really stop a German 88 millimeter tank round, but sometimes that didn’t matter. The illusion of increased armor can be enough to raise a tank crew’s morale.

There was one more benefit to fitting your Sherman tank with logs instead of sandbags, tank parts or whatever else wasn’t tied down and might stop a projectile. Tying them to the sides and front of the tank gave the vehicle some space between it and other passing tanks, creating a standoff distance between it and any other tank that might be driving by.

Trees became so effective for the latter two reasons (it didn’t really do much for any kind of anti-tank round) that Soviet Red Army tanks began leaving the factory with tree trunks tied to the sides. The logs were so effective against the Russian winter and rains that the USSR had to give every tank a chance to pull itself out of the mud.