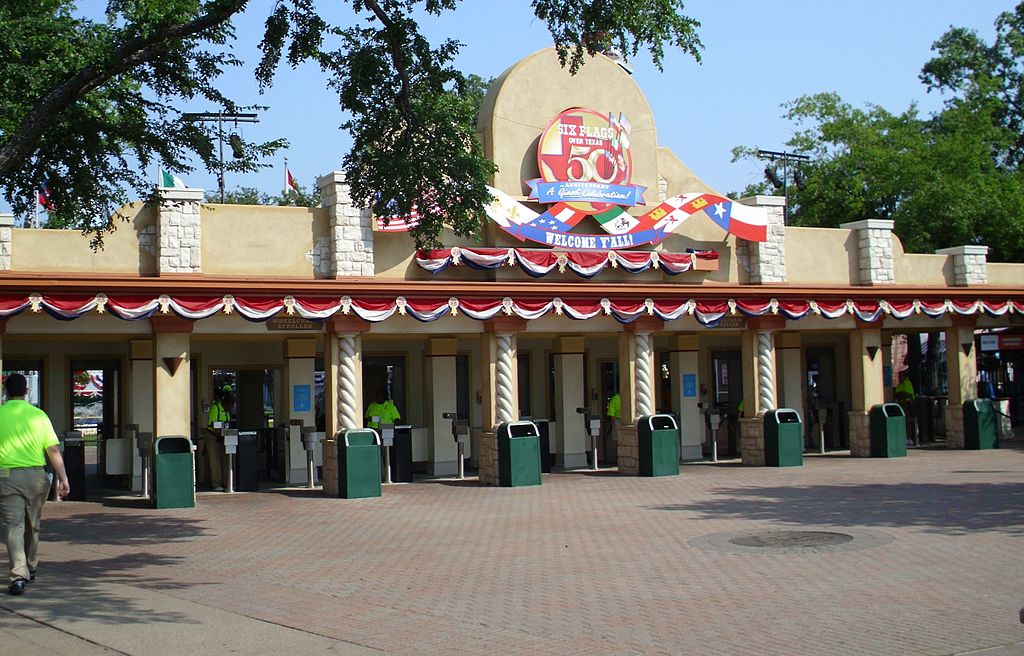 Today, Arlington, Texas’ Six Flags Over Texas is a theme park known for Superman’s Tower of Power, Batman: the Ride, and the Pandemonium, where no two rides are ever the same. But when it first opened in 1961, the DC Comics-themed areas of the park were decades away. Instead, it featured a Confederate States of America theme, complete with a recruiting office.

Six Flags Over Texas is the original Six Flags amusement park. The park’s name comes from the six flags of nations who controlled the area Texas now occupies throughout its history. First Spain, then France, Mexico, the Republic of Texas, the United States and the Confederate States.

When it was first raised, however, the United States was a very different place and the idea of a Confederate-themed area of the park wasn’t likely to catch much attention. The park was divided into six sections, each matching the theme of the six national flags who once controlled the area. The United States of 1961 was represented by a “Modern” area theme of the park.

The Confederacy was an area of the park that was filled with Confederate soldiers marching in formation, Civil War battle reenactments, and the occasional execution of a Union spy. In these mock-execution shows, the park’s Confederate soldiers would search the crowd of tourists looking for the spy. Once a tourist was chosen as the spy, they would be lined up and “shot” by firing squad.

Other attractions to the Confederacy-themed area of the park included the Little Dixie Carousel, the Chicken Plantation, and Colonel’s Pizza. Eventually, the more emphatic elements of the Confederacy, including the troop formations, reenactments and mock executions disappeared from the Confederate area along with the name change.

In the 1990s, the area was renamed the Old South and the Army of Northern Virginia battle flag was replaced with the less-recognizable, actual flag of the Confederate States of America. Which might be proof that using theme parks as history teachers is not an effective strategy. Tourists apparently wanted the thrill of enlisting for the Civil War, not learning things.

By this time, however, most of the more noteworthy and popular rides at the park were in other areas, so few people noticed. But the Confederate battle flag still flew at the park’s main entrance.

As time went on, the park expanded to include new themes, including today’s Gotham City and Boomtown, a tribute to Texas’ historical oil boom.

Despite the seemingly historical reason the Confederate flag was still flying at Six Flags Over Texas, the theme park finally gave in and took the sixth flag down after the violent altercation that took place during a “Unite the Right” rally in Charlottesville, Virginia, in 2017.

Instead of the countries that once ruled over Texas, all six flags were replaced by the American flag at the park entrance.