Hitler's watch sold for $1.1 million in a controversial auction - We Are The Mighty

Hitler’s watch sold for $1.1 million in a controversial auction 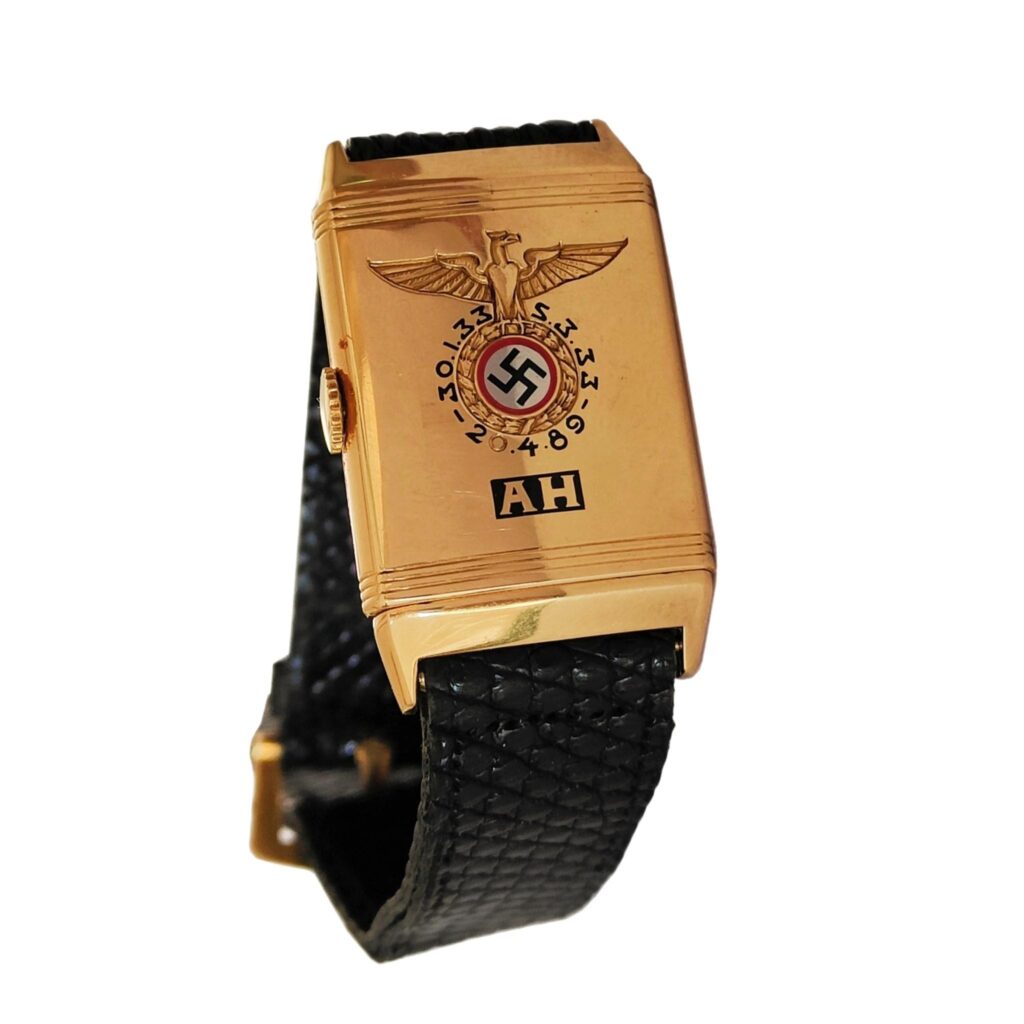 War trophies have been collected for as long as people have been fighting. During WWII, victorious allied troops scrounged Germany for relics of the Nazi regime to take home with them. On May 4, 1945, the French 2nd Armored Division entered Hitler’s private residences at Berchtesgaden in the Bavarian mountains. A soldier in this unit came away with quite a war trophy of his own: Hitler’s gold watch.

The watch in question is a reversible type famously associated with the legacy watchmaker LeCoultre. Originally designed for polo players, the watch face can be reversed to protect it during play. While the watch movement was made by LeCoultre, the case was produced by a subcontractor. Markings on the watch indicate that it was manufactured in Switzerland and imported into Germany where its gold construction was validated again.

Of course, it’s the unique engravings that identify the watch’s previous owner. The protective casebook bears a Nazi eagle, swastika, Hitler’s initials, and three dates. First, 20.4.89 denotes Hitler’s birthday, April 20, 1889. Second, 30.1.33, was his appointment as Chancellor of Germany. Finally, 5.3.33 marks the date of the German federal elections that gave Hitler access to the full power of the German government.

This special watch was commissioned by the Nazi Party as a gift for the Führer. The final assembly and engraving was performed by the Munich-based watch firm Huber, whose name can be seen on the watch face. Founded in 1856, Huber became the official watch supplier for the Royal Court of Bavaria in 1912. The brand became popular with German military officers and even supplied official time pieces for the 1936 Berlin Olympics.

On May 4, 1945, Sgt. Robert Mignot and other French troops entered Hitler’s Berghof and Eagle’s Nest residences in Berchtesgaden and cleared the vast network of tunnels and bunkers underneath them. It is likely here that Mignot captured Hitler’s Huber watch as a war trophy. He returned to France after the war and later sold the watch to his cousin. Two generations later, Hitler’s watch was put up for auction in Paris through Alexander Historical Auctions.

The watch is in extraordinarily good condition for such an old piece. An examination by a watch expert commissioned by Alexander Historical Auctions reported that only a cleaning to remove dried oil from the movement would be required. Moreover, the reptile watch band is frayed only at one end. The auction house also provided documents, records, and appraisals verifying the watch’s authenticity.

Hitler’s Huber watch was expected to sell for between $2-4 million. Interestingly, it sold for $1.1 million instead to an anonymous buyer on July 28, 2022. The sale was a point of controversy with 34 Jewish leaders signing an open letter calling for Nazi items to be pulled from the auction. “This auction, whether unwittingly or not, is doing two things: one, giving succour to those who idealise what the Nazi party stood for. Two: Offering buyers the chance to titillate a guest or loved one with an item belonging to a genocidal murderer and his supporters,” said Rabbi Menachem Margolin, chairman of the European Jewish Association.

In response to the letter, Alexander Historical Auctions made a statement to the German press. “Whether good or bad history, it must be preserved,” said Senior Vice President Mindy Greenstein to Deutsche Welle. “If you destroy history, there is no proof that it happened.”