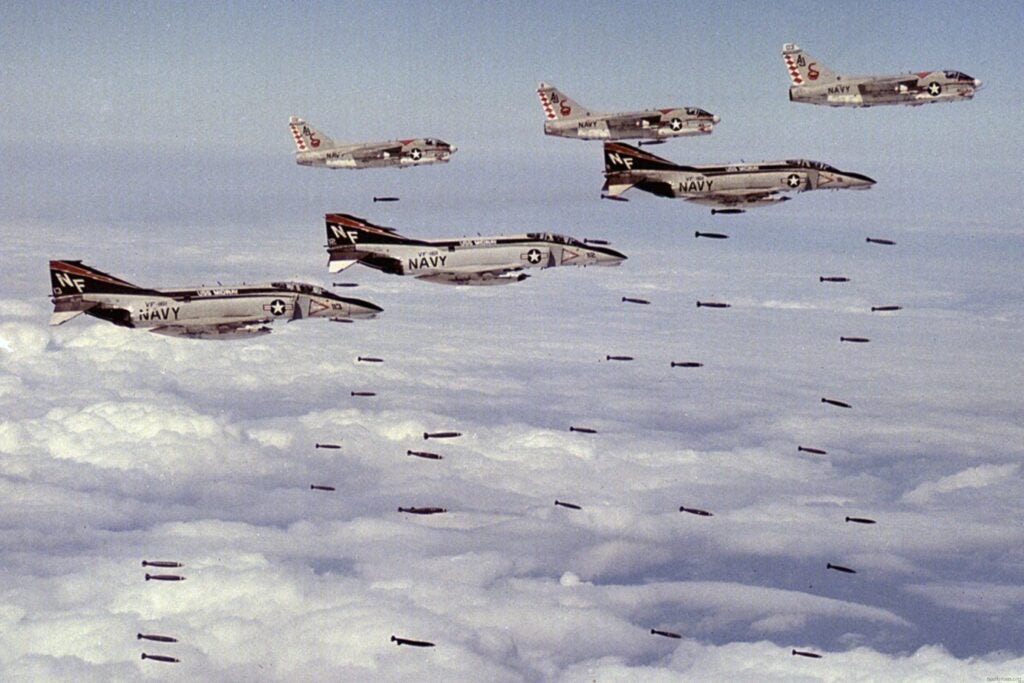 Since WWI, when fighter planes first took to the skies and chased each other in dogfights, certain opposing aircraft have come to represent the aerial aspect of different theaters and conflicts. For the Battle of Britain, it was the British Supermarine Spitfire and the German Messerschmitt Bf 109. Aerial combat during the Korean War is often associated with American F-86 Sabres duking it out with communist MiG-15s. From the Vietnam War, one of the most prominent aircraft rivalries was between the iconic F-4 Phantom II and the MiG-17 or MiG-21. Interestingly, the first and last confirmed kills scored against North Vietnamese MiG-17s during the war were from fighters launched by the same carrier.

Commissioned on September 10, 1945, USS Midway (CV-41) was America’s first post-WWII aircraft carrier. She was also the biggest ship in the world, a title she held until 1955. In fact, Midway was the first US aircraft carrier that was too big to transit the Panama Canal. Over her 47-year career, Midway received upgrades including steam catapults, arresting gear, and an angled flight deck to accommodate the Navy’s newest fighter jets.

In March 1965, Fighter Squadron 21 (VF-21) Freelancers sailed to Southeast Asia aboard USS Midway in support of Operation Rolling Thunder. On June 17, two Phantoms from VF-21 engaged four North Vietnamese MiG-17s. Though they were outnumbered, the Phantoms stood their ground and fought. The first MiG-17 was shot down by Cdr. Louis C. Page and Lt. John C. Smith with an AIM-7D Sparrow III missile. Their wingmen, Lt. David Batson and Lt. Cdr. Robert Doremus shot down a second MiG-17 with another Sparrow. These were the first confirmed kills on North Vietnamese aircraft.

Air Force Capt. Don Kligus scored a possible air-to-air kill on a North Vietnamese MiG-17 earlier on April 4 while Navy Lt. JG Terrence M. Murphy and Ens. Ronald J. Fegan bagged a Chinese MiG-17 on April 9 flying from USS Ranger (CVA-61). Because the former kill was unconfirmed and the latter was on a Chinese aircraft, neither of them were officially recognized. However, Murphy and Fegan’s kill would be recognized years later. Still, Page and Smith hold the title of scoring the first confirmed kill on a North Vietnamese MiG during the war.

In April 1972, Midway again deployed to Southeast Asia with Fighter Squadron 161 (VF-161) Chargers aboard. Over nearly 12 months of intense flight operations in support of Operation Linebacker, VF-161 scored five kills on enemy MiGs, including the final kill of the war. On January 12, 1973, Lt. Vic Kovaleski and Lt. Jim Wise were flying a mission in their Phantom when they encountered a North Vietnamese MiG-17. Using an AIM-9 Sidewinder missile, Kovaleski and Wise shot down the MiG and scored the Vietnam War’s final air-to-air kill.