Today in military history: Marines invade Iwo Jima - We Are The Mighty 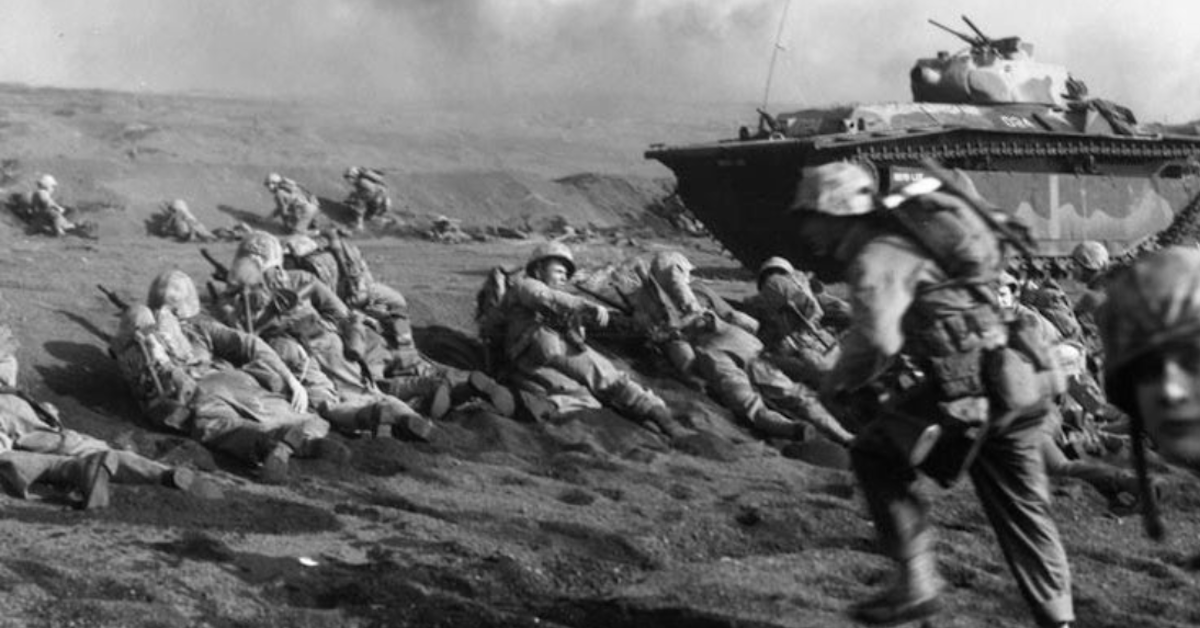 On Feb. 19, 1945, Marines invaded Iwo Jima, igniting some of the most intense and violent fighting of the Pacific in World War II.

Ask any Marine about Iwo Jima, and you will see instant reverence in their eyes. “Uncommon valor was a common virtue” was the phrase used to describe the spirit of the men that fought that battle.

Iwo Jima was a barren Pacific Island located roughly 660 miles from Japan, making it an ideal forward-deployed location for the Allies and Axis powers alike. In February of 1944, American B-24 and B-25 bombers began to raid the island, assaulting heavy Japanese artillery positions for 74 days.

The island was defended by over 21,000 Japanese troops who were well-concealed in an elaborate network of tunnels and underground installations. On the morning of February 19th, just before the actual invasion, underwater demolition teams of American Marines advanced with the mission of revealing Japanese gun positions.

More than 550 Marines were killed by the end of the first day and more than 1,800 were wounded, but the iconic image of American victory at Iwo Jima was still days away.

The US thought the battle would last only a week.

It’s not that the Americans thought less of the Japanese. It was at this point they thought they knew what they were going to do. After victories through the South Pacific from Guadalcanal to the Philippines, the U.S. military thought they had a winning plan. Start with a devastating naval bombardment, get the men on the beach, provide them with close air support, and take the airfields quickly. They did that but realized way too soon that the naval bombardment didn’t do much damage, the Japanese actually wanted the Americans to land, and that they had to fight for every square inch of the island. The initial weeklong projection turned out to be five weeks of some of the worst fighting the Americans had seen to that point.

Within a minute a mortar shell exploded among the group … his left foot and ankle hung from his leg, held on by a ribbon of flesh … Within minutes a second round landed near him and fragments tore into his other leg. For nearly an hour he wondered where the next shell would land. He was soon to find out as a shell burst almost on top of him, wounding him for the third time in the shoulder. Almost at once another explosion bounced him several feet into the air and hot shards ripped into both thighs … as he lifted his arm to look at his watch a mortar shell exploded only feet away and blasted the watch from his wrist and tore a large jagged hole in his forearm: “I was beginning to know what it must be like to be crucified,” he would later say.

At the end of the five-week battle, the Americans would have 26,000 casualties versus 18,000 for the Japanese.