This eccentric tank design was appropriately named the Praying Mantis

This eccentric tank design was appropriately named the ‘Praying Mantis’ 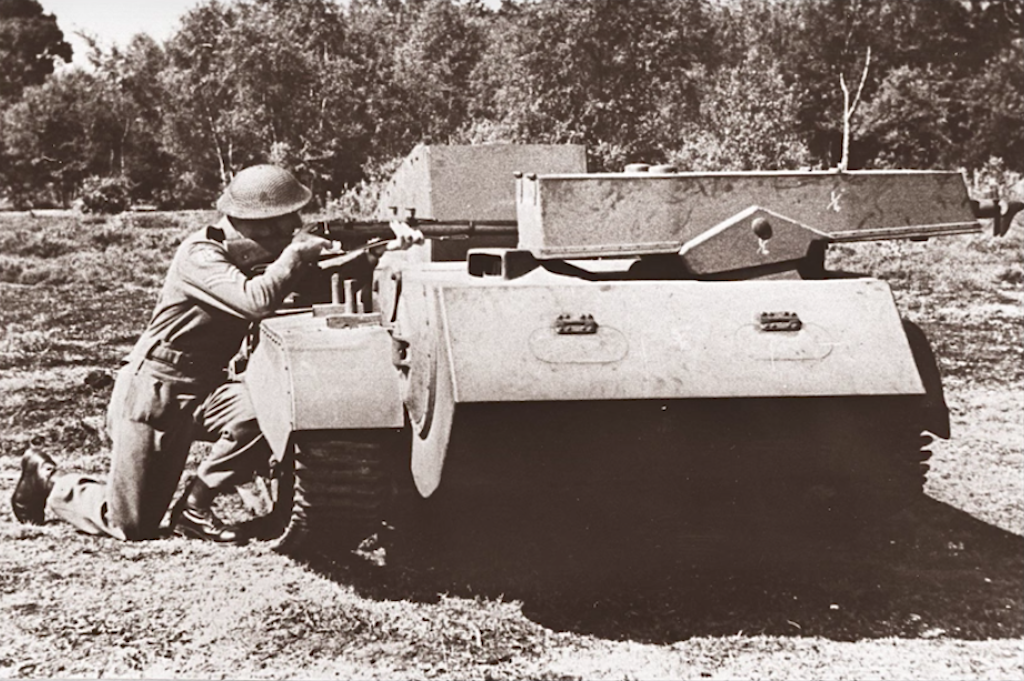 Military vehicles are often named after animals to reflect their abilities. The F-15 Eagle fighter jet is an all-American air superiority aircraft while the French Gazelle helicopter is famed for its impressive speed. In the case of the British Praying Mantis tank, its animal name was appropriately derived from its appearance.

The Praying Mantis was privately developed by Ernest James Tapp of County Commercial Cars. Reportedly inspired by his service as a machine gunner during WWI, Tapp sought to build a vehicle that would allow a gunner to shoot over obstacles while remaining as concealed as possible. He accomplished this by giving his tank an elevating body and turret, hence the Praying Mantis name.

In 1937, Tapp patented his idea. Initially, he used a completely original design as a proof of concept. This first prototype had thin tracks and just four road wheels. However, it allowed Tapp to test his concept’s performance and refine the driver’s position. The Praying Mantis prototype was presented to the War Office shortly after the start of WWII and a second prototype was commissioned in 1943.

Improving on his first prototype, Tapp based the second Praying Mantis on the popular Universal Carrier chassis. Having proved itself in North Africa as a reliable troop and supply transport as well as a gun carrier, the Universal Carrier was a natural choice to build the Praying Mantis on. With a larger chassis, Tapp was able to fully realize the most unique aspect of his design: the elongated crew compartment.

The Praying Mantis was crewed by a driver and gunner. They laid flat on their bellies in the crew compartment with their controls underneath them. In its lowered position, the crew compartment sat nearly parallel with the tank’s chassis, giving the Praying Mantis a very low profile. However, it could be hydraulically lifted to an able of about 55 degrees. The maximum elevation was about 11.5 feet off the ground. In its elevated position, the head of the crew compartment could rotate down to allow two .303 Bren Light Machine Guns to fire downwards. The guns were mounted in a turret on the head known as the helmet.

Although it was a clever design, the Praying Mantis had many flaws. To start with, the crew positions and controls were uncomfortable and difficult to use. Moreover, the vehicle’s bumpy ride and swaying led to motion sickness for many testers. As a result, the Praying Mantis was canceled in 1944. Although Tapp’s first prototype was scrapped, the second survived the war and is preserved at the Bovington Tank Museum where its hydraulic joints are still functional.