The iconic WWII kissing photo was recreated after 70 years

The iconic WWII kissing photo was recreated after 70 years 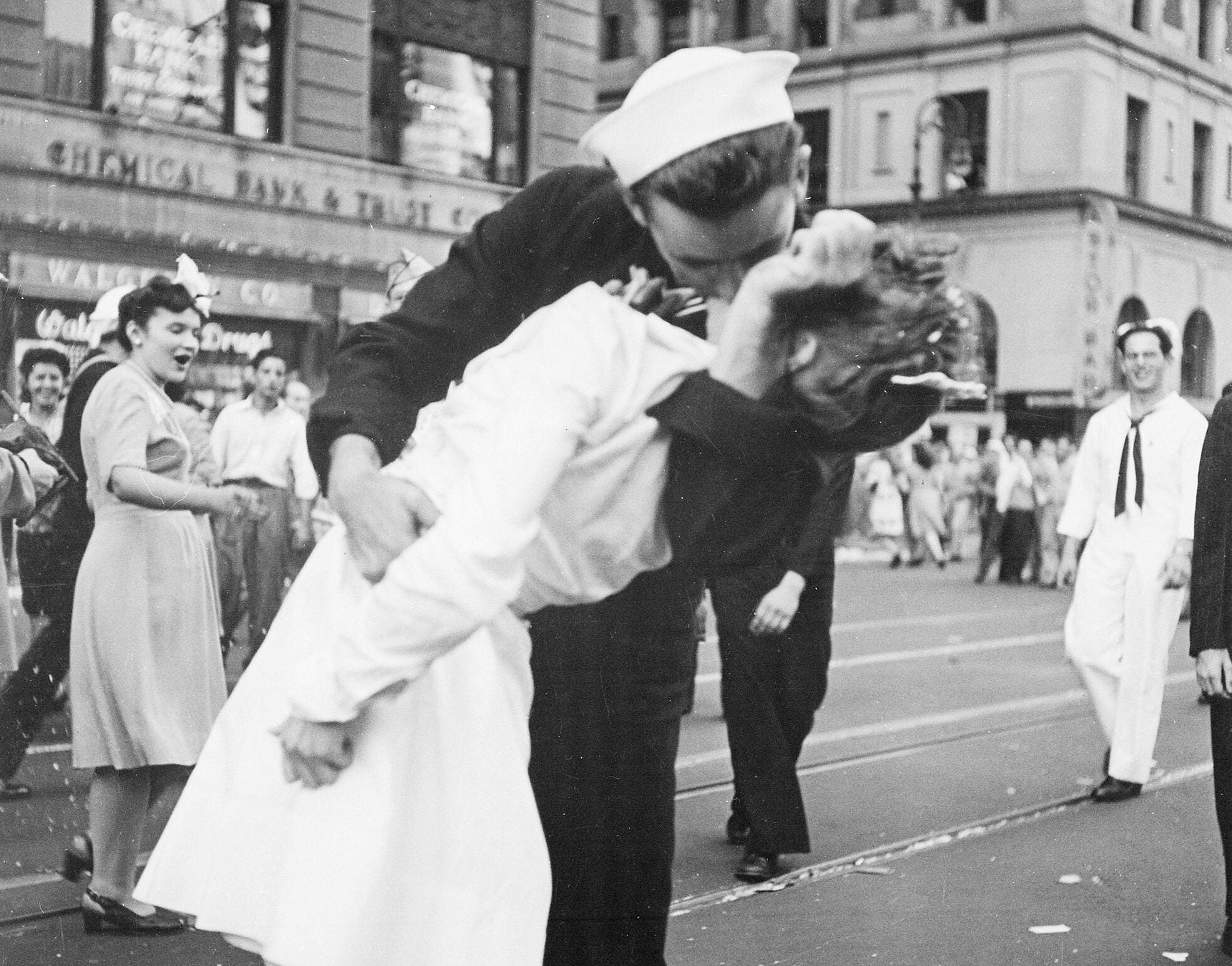 V-J Day in Times Square is perhaps one of the most well-known photos from all of World War II. You’ve likely seen it, even if you haven’t realized you’ve seen it – a portrait where a sailor gives a passionate kiss to a nurse in a white uniform. There are sailors, pedestrians, and tall buildings behind them, as the pair celebrates victory over Japan.

The picture was captured by Alfred Eisenstaedt, who became a famous photographer. (He landed the cover of Life with his pictures an incredible 90 times.)

As it turns out, the picture features a sailor kissing a total stranger, who is, in fact a dental assistant, (not a nurse). Life picked it up and turned the image into a household sight. It was part of a 12-page spread full of people celebrating, titled Victory Celebrations. At the time, Eisenstaedt said he was photographing so many celebrations that he didn’t even get the subjects’ names.

However, it was known the pair were strangers because the soldier was running and kissing every female in sight.

“I saw a sailor running along the street grabbing any and every girl in sight. Whether she was a grandmother, stout, thin, old, didn’t make a difference,” Eisenstaedt said. In fact, he added that he only took this photo due to the color contrasts of the pair’s uniforms.

A similar version of the image was taken by Victor Jorgensen, a Navy photographer.

It’s further known that V-J Day was taken along 45th Street, looking north from Broadway and Seventh Ave.’s intersection and that it was taken at 5:51 pm ET. These exact details are known because so many people claimed it was them in the photograph. And with 1940s photography, the images were just blurry enough that it could have been any number of New Yorkers.

After the image made such a splash, Life asked the pair to come forward with their names, though no takers came through. However, decades later, in 1980, people began claiming to be in the photo.

An entire book was dedicated to the project, using background checks and expert photo analysis to determine who was actually in the image. The book, The Kissing Sailor (2012), named the woman was Greta Zimmer Friedman. The man was proven to be Petty Officer 1st Class George Mendonsa. He publicly said he saw someone running and thought it was her boyfriend or husband, but realized it was a photographer and “held her as long as it took him to take the picture.”

In decades since, the scene has been recreated over and over again – a 25-foot statue, Unconditional Surrender has been placed in several towns. Though there has been controversy due to perceived sexual assault, the kisser, Friedman, said it was a celebration of the end of a war.

On their 70th anniversary, a couple of Navy veterans recreated the pose in front of the statue. In 2015, hundreds of couples gathered to do the same pose to celebrate the 70th anniversary of Victory over Japan.

Today, there are six existing statues of the pose, three of which are in the United States. The other three are placed in Italy, Belgium, and the United Kingdom.