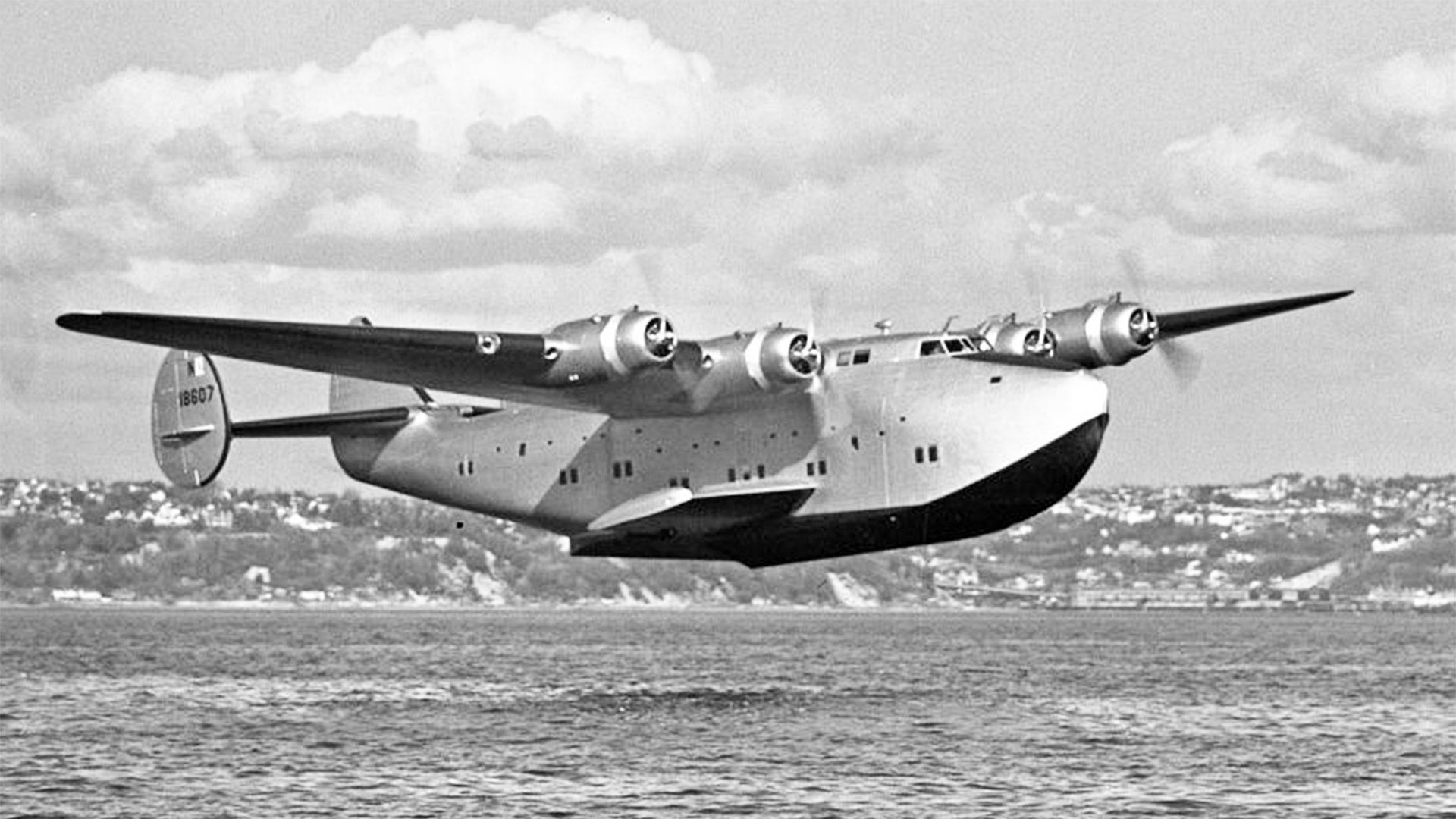 December 7, 1941, brought the United States fully into WWII with the Japanese surprise attack at Pearl Harbor. Across the Pacific, the American territories of Guam and the Philippines were also attacked. Japan also attacked the British in Burma and Hong Kong, expanding the war in the Pacific. The outbreak of war was a complication for a Pan American World Airways seaplane that was en route from San Francisco to New Zealand.

The Boeing 314 Clipper flying boat with civil registration NC18602 was delivered to Pan Am and made its shakedown flight from San Francisco to Hong Kong from February 23 to March 3, 1939. She was christened California Clipper and home-ported in San Francisco as part of Pan Am’s expanded services across the Pacific.

On December 2, 1941, California Clipper departed San Francisco on a scheduled passenger service to Auckland. Under the command of Capt. Robert Ford, the Clipper with its 12 passengers and crew of 10 was just a few hours away from Auckland Harbor when news of the Japanese attack on Pearl Harbor came over the radio. Radio operator John Poindexter deciphered the coded transmission and passed the news along to the crew. California Clipper‘s return flight to San Francisco across the Pacific was no longer an option.

For the next week, the Pan Am crew waited intently in the communications room at the U.S. Embassy in Auckland for instructions from Pan Am in New York. Finally, they received their instructions: return to the United States the long way round…west. The daunting journey would see the crew fly over 30,000 miles with limited support and across uncertain territories in the midst of a world war. Still, it was their only way home.

California Clipper‘s first hop was to Noumea where they picked up Pan Am personnel there and ferried them to safety in Australia. On the evening of December 16, 1941, the flying boat took off from Auckland Harbor with no lights and under radio silence, beginning the long journey home. The aircraft landed in Noumea just as the sun came up. Ford instructed the Pan Am station manager to round everyone up and be ready to leave. After just two hours on the ground, California Clipper was refueled and back in the air en route to Australia.

After dropping off their fellow Pan Am employees in Australia, the crew of California Clipper began scrounging supplies for the rest of the trip. Crucially, Ford set about looking for money to finance the impromptu circumnavigation. They only had enough to fund the return trip from Auckland to San Francisco. Luckily, a banker in Gladstone retrieved $500 from his branch and generously gave it to Ford. The captain gave the money to navigator Rod Brown for safekeeping in his lock box. “That $500 financed the rest of the trip all the way to New York,” Ford later recounted to Pan Am.

On December 17, California Clipper departed Queensland for Darwin. With no 100 octane aviation fuel to be found in Queensland and no river big enough to land the flying boat, Ford feared having to belly land the Clipper in the desert. Luckily, the plane made it safely to Darwin where the appropriate fuel was found. However, it had to be transferred to California Clipper manually from 5-gallon jerry cans. The crew set about the arduous task which wasn’t complete until past midnight. After a few hours of rest, California Clipper took off in the early morning for the Dutch East Indies.

Early on the morning of December 18, California Clipper took off for Surabaya, the second-largest city on the island of Java. As they neared the city, the foreign Boeing was intercepted by British Beufort fighters. Although the Clipper could hear the Brits the over the radio, the Brits couldn’t hear them. Ford flew in a nonthreatening manner and was eventually given permission to land. Still, the British radio controller issued the order, “If they do anything suspicious, shoot them out of the sky.”

On approach, Ford saw that the harbor was full of warships. Keen to stay out of trouble, he set the Clipper down just outside the harbor entrance, unknowingly in the middle of a minefield. A launch waved the flying boat into the harbor until it cleared the mines. Unfortunately, 100 octane aviation fuel was in short supply and reserved for the military. However, the Pan Am flight was offered 76 octane automobile fuel.

California Clipper took off on the 100 octane fuel before switching to the 76 octane at cruising altitude. “The engines almost jumped out of their mounts, but they ran,” Ford recounted. En route to Trincomalee, Ceylon, Ford ordered a descent below the clouds to determine their location. Seeing a Japanese submarine on the surface, Ford climbed back above the clouds to safety. The sub fired at least one round at the Clipper that missed. At Trincomalee, Ford reported the encounter to a British Commodore who didn’t believe the American pilot.

After the 8-hour flight, California Clipper landed in Bahrain. There, again, only 76 octane fuel was to be found. Moreover, Ford was warned not to fly over Arabia. “The Saudis had apparently already caught some British fliers who had been forced down there,” he recalled. “The natives had dug a hole, buried them in it up to their necks, and just left them.” California Clipper departed Bahrain on December 28, flying north to Kuwait before turning west for Khartoum, Sudan. Interestingly, the plane flew directly over the Mosque at Mecca. “I could see the people pouring out of it, it was just like kicking an anthill,” Ford said. “They were probably firing at us, but at least they didn’t have any anti-aircraft.”

On December 29, California Clipper landed in the Nile River. There, while 100 octane fuel was available, the local British commander requested that Ford wait for VIP and fly them to Léopoldville, Belgian Congo. Ford reluctantly agreed to wait and fly the VIP who turned out to be the wife of a British official (she was never identified). On the morning of January 1, 1942, California Clipper took off from the Nile. Although part of the exhaust stack on one of the engines dislodged, making noise and smoke, Ford decided to press on.

Late in the afternoon, California Clipper landed on the Congo River near the Congolese capitol. There, Ford and the crew were greeted by welcome sights: a Pan Am airport manager, radio operator, and cold beer. “That was one of the high points of the whole trip,” Ford recalled. In Léopoldville, the crew prepared for the longest leg of their journey home: the 3,100 nautical mile trans-Atlantic flight to Natal, Brazil.

California Clipper took off the next morning. Loaded with fuel, Ford had to overheat the engines to get into the air. Once the plane was airborne, he turned west for Brazil. The long flight took over 20 hours. Ford had to tap into the fuel reserves to navigate around weather, but California Clipper landed in Natal without incident. While waiting to clear immigration, the crew was forced to disembark the Clipper while Brazilian authorities fumigated the plane for yellow fever. The crew later discovered that the lock box on the flight deck had been broken into and papers and money stolen.

At 3AM the next morning, California Clipper landed at the Pan Am station at Port of Spain, Trinidad. There, the crew got some much-needed rest while Pan Am mechanics repaired the engine smoke stack. On the afternoon of January 5, the Clipper took off for its final hop to New York.

Just before 6AM on January 6, the Marine Terminal at LaGuardia received a most unique radio call. “California Clipper, inbound from Auckland, New Zealand, Captain Ford reporting. Overhead in five minutes.” Despite arriving over New York, the plane was forced to circle for another hour until there was light enough to land. Pacific Clipper finally touched down at 7:12AM. Ironically, after safely navigating war zones across the globe, the plane struck a sandbar while taxiing. Luckily, the plane was undamaged.

California Clipper and its crew flew 31,500 miles in 209 hours. Their journey home was the first round-the-world flight by a commercial airliner, the longest continuous flight by a commercial plane, and the longest non-stop flight in Pan Am’s history. Ford and the rest of the crew spent the remainder of the war flying contract missions for the U.S. military. Pan Am also renamed the aircraft Pacific Clipper. After the war, the Clipper was sold to Universal Airlines. It was damaged in a storm and, tragically, salvaged for parts.