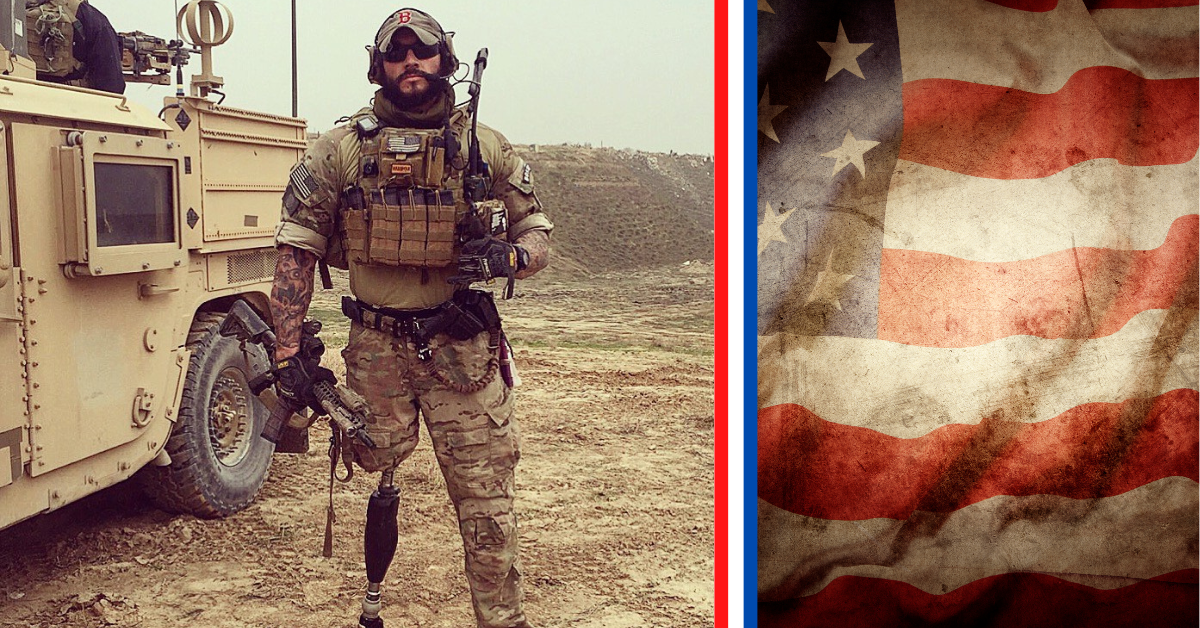 Machine fighter. That’s what the African locals called Green Beret CW2 Nick Lavery on his deployments after returning to his Special Forces team as an amputee. After his life-threatening injury, the Green Beret was told being an operator would never happen again.

He proved everyone wrong.

But first, he was a Boston native who loved football. “I don’t come from a very robust military family background at all. I had an uncle that was in for a real brief amount of time. My grandfather was in the very tail end of World War II. The short answer for why I went in is 9/11,” he explained.

As a sophomore in college, watching the terrorist attacks would change everything for Lavery. “At that moment, seeing my countrymen making the choice between burning alive in a building or jumping out of it just filled me with absolute rage. At that point, I really struggled to stay in school because I knew where things were going and I wanted to be part of that response,” he shared.

Through the encouragement of his family and friends, he finished his Criminal Justice degree. Lavery had his eye on one thing coming out of graduation in 2007: the elite Green Beret.

“I wanted to be at the tip of the spear. When I initially came in, it wasn’t with this career in mind, it wasn’t to turn this into a profession or a lifestyle. It was to come in, get to where the fighting is happening, kick some ass and then get out and then figure out what I want to do when I grow up,” he admitted.

Tip of the Spear

It wasn’t long before Lavery found his calling in being a Green Beret. Halfway through his first deployment, he reenlisted.

March 11, 2013 was a morning like any other, starting with a briefing for a joint mission with Afghan Army Special Forces leadership and the team. It was his second combat deployment to Afghanistan and nearing its end. He finished his comms check and turned around to go to his vehicle. Gunfire erupted without warning.

He realized it was an insider attack.

The lone gunman quickly morphed into a full fledged ambush to their camp. Lavery saw a young soldier out of the corner of his eye, completely frozen. Without regard to his own safety, he ran to get the soldier to cover and took machine gun rounds to the legs as soon as he made it in front of him.

It would take three tourniquets and using his own fingers to stop the severed femoral artery in his right leg to keep from bleeding out, effectively saving his life.

The first medivac flight would lead to receiving the wrong blood type in a transfusion, almost killing him. On his second, he coded in air and the prognosis for surviving was grim. But he made it to Bagram Air Force Base and through the initial surgeries, one which took his right leg.

“From the time that I was in the intensive care unit at Walter Reed, still really fighting for my life, I made the decision that I wouldn’t be satisfied with just staying in the Army or staying on active duty. I had to go back to the exact same lifestyle I just left and it was non negotiable for me,” he explained. “I had a goal I could grab onto. I could smell it, I could touch it and I could see the details of it. That’s what kept me able to just keep moving forward, despite all the setbacks and the adversity.”

Though the military as a whole had just begun allowing amputees to avoid medical retirement and stay in, no one had stayed in the Army Special Forces and deployed with their teams after losing a limb. He fought through over 30 surgeries and endless rehab to prove himself combat ready. Just over two years after becoming an above the knee amputee, Lavery was back on his 3rd Special Forces Group ODA and in Afghanistan.

Making it back to his team and deploying to Afghanistan with a prosthetic leg garnered the quiet professional a lot of notoriety when he returned. “I had a mission to return to and that’s all I cared about,” he shared.

Despite being laser focused on his role, invitations to speak at events began to roll in. Lavery admitted it was really hard at first. “I can look back now with a tremendous amount of gratitude, because that really was the catalyst for me, to see sharing my story as a responsibility, to see it as an obligation,” he said. “It wasn’t about me seeking fame, or fortune, or whatever. It was about leveraging the lessons I learned to enable someone else who’s struggling with something.”

A good friend from his college days began encouraging him to write a book, which he blew off initially. It was July 2020, he’d just finished combat diving school (another first as an amputee) and the pandemic was giving him way too much time on his hands. Knowing he had four months until his next deployment, Lavery got to work typing. While he was overseas it went through the DOD and SOCOM approval process and got edited.

“It wasn’t till I got that first edit back, where it was actually formatted into something that looked like a book, that’s when it became real for me. I was like holy, am I really going to do this? I had to take a tactical pause to look around and reassess,” he said.

Objective Secure: The Battle-Tested Guide to Goal Achievement was published on January 19, 2022. Lavery said the feedback and witnessing the impact of the book made all of the doubts and hard work completely worth it.

Today, he wears a lot of different hats – pun absolutely intended. His Green Beret (he’s still active duty), husband, father, author and speaker. Not to mention the 6’5” warrior is highly committed to maintaining his health and physical fitness. Managing his time with all of his responsibilities can be challenging.

“I live a really lean and structured lifestyle… I think for me, it just has to start with a very clearly defined set of priorities that I have to keep myself in check,” Lavery explained. “My family is the highlight of my life and they are number one, period. When I go to work, I have a job to do and it can be a whole bunch of different things. But when I come home, I’m a husband, and I’m Dad. I get on the floor and I play Legos and I build forts. ”

A Family Guy at Heart

The description may go against the typical assumptions made about Special Forces operators but he is insistent that most team guys are family guys. “While you have these hardened warriors, which we are, who are willing to go do a lot of really difficult, nasty things, for the sake of our country – we’re also husbands and fathers. That job is just as important,” he said.

As for what he would say to people reading his story for the first time who may be struggling in life or with a goal, it was to the point.

“This is not a dress rehearsal. I’ve been as close to death as it gets and life is a gift,” Lavery said. “We have this one shot at this game. We all know that it is going to end at some point. So why not just leave it all out on the field?”